Starting out in 2013 The Six Tones has been working on transcriptions of some modernist classics with the ambition of creating new  readings of music from the New York and Darmstadt schools. The perspective that the group provides is post-colonial and post modern. The music has a strong element of traditional Vietnamese music and the particular sound that the group has developed becomes a filter through which music by John Cage, Bruno Maderna, Karlheinz Stockhausen and Bruno Maderna is presented in new light.

After performances in Asia of Cage’s Four 6 and Bruno Maderna’s Serenata per un satellite and a workshop performance of Stockhausen’s Kurzwellen we are now planning to tour this production during 2015. 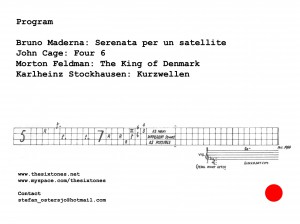