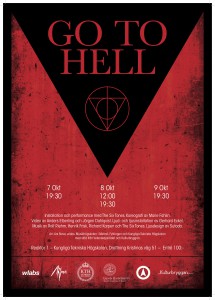 Go To Hell: gesture and sound on the threshold.

Go to Hell is an installation and performance work set on the threshold between gesture and sound and between the worlds of the dead and the living. In the first version of the piece, the three musicians of the Vietnamese/Swedish group The Six Tones moved through the subterranean landscape of the dismantled R1 nuclear reactor like mythological after-images. In Go To Hell, fragments from the myth of Orpheus are double-exposed with the tale of a beheaded ghost from Vietnamese Tuong theatre. Evoked by the potential danger of the location, the audience is invited to explore an interactive and open form installation that relates to ancient myth and its bearings on experimental art of today. The choreographies and video art all relate to the gestural and conceptual content of Toccata Orpheus, a composition for guitar solo by the German composer Rolf Riehm.

In Toccata Orpheus it is the radical expression of the lyre player’s art that threatens the order of the underworld. Orpheus plays a high-risk game and exposes all the tricks of his musical and scenic skills expressed in intense choreographies of hand and arm movements. A new  sound and video installation, by Anders Elberling and Henrik Frisk, an interactive sound and light installation by Gerhard Eckel and the interactive electronic soundscape in the space are derived from analysis of video recordings and of motion tracking data from performance of Riehm’s composition. The fragile plucked sounds and the details of gesture are transposed into an interactive multimedia composition of light, video, sound and movement in Go To Hell.

R1 was Sweden’s first nuclear reactor. It was operated from July 1954 until June 1970 at the Royal Institute of Technology (KTH) campus in Stockholm. Go To Hell has also been performed in other eery sites in Belgium and Vietnam. We are now looking for another dismantled reactor where we can again bring audiences to hell.

The audience in Stockholm had to walk the 26 meters down below the ground in these stairs while loud electronic music by Richard Karpen was thundering from below. In Gent, Belgium,  the entrance was a dark and narrow staircase leading below the concert hall. 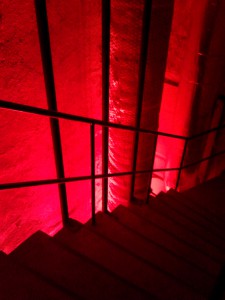 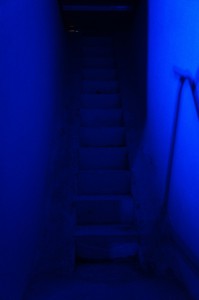 In the reactor hall, the twelve offices that make up one of the walls are the playroom for a sound and light installation by the Austrian composer Gerhard Eckel. Motion capture data from Stefan Östersjö’s performance of the guitar composition “Toccata Orpheus”, by the German composer Rolf Riehm, is the source for gesture and sound that creates a choreographed movement in sound and light over the wall. The sound can be altered by opening and closing the office doors. After a few minutes, the three musicians of The Six Tones emerge from inside offices and begin to operate the doors. 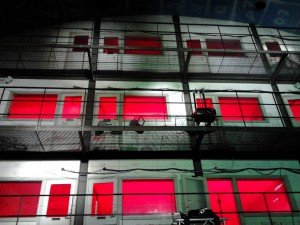 Eventually the three performers of The Six Tones descend in a staircase and begin to perform choreographies that gradually map the entire space. These choreographies are directly drawn from gesture material in the original guitar composition and performed with and without instruments. 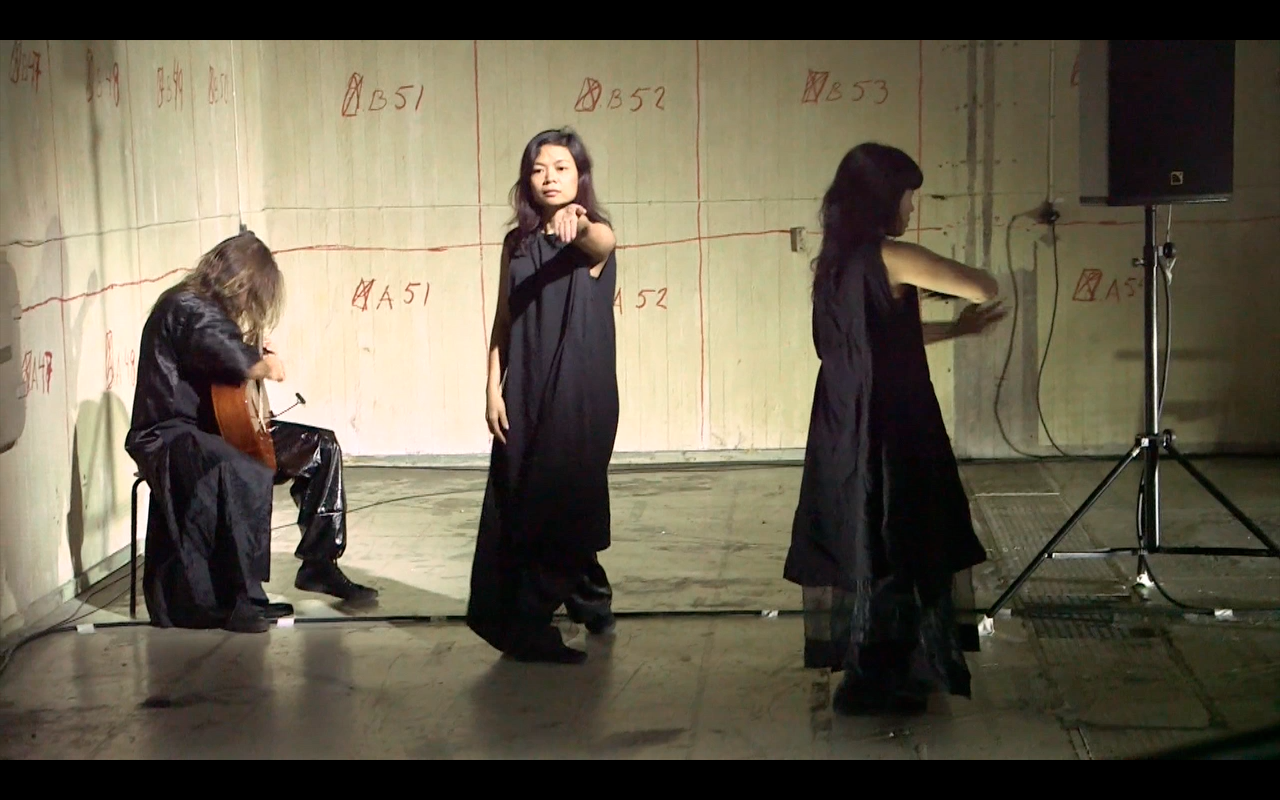 A video work on three screens by Anders Elberling and Henrik Frisk creates yet another interpretative layer into the renderings of the choreography in Riehm’s guitar composition. But the video work also draws out the references to the Orpheus myth, spelled out already in the prose poem by Rolf Riehm in the preface to the score:

It is understood that Orpheus’ music touches the heart. His skill makes stones become soft and moves trees from where they are rooted.

This is not what upsets the gods of the underworld. One should rather stress the point that the power of Orpheus’ art was capable of throwing the order of nature out of balance. After a phase of intimidation and conformity, Orpheus finds his way back to his true self by devoting himself to his music in such a radically irresponsible manner that he manages to arouse the power of desiring in the souls lingering dazed in a realm of unconsciousness. This is sheer rebellion. For the mere prize of restoring one dead mortal to life, Hades hurries him back into daylight.

…Orpheus, a stranger from afar: shaman, magician and, besides that, he came from Thracia, the absolute foreign world.

After his death he sings the SONG OF ROCKS AND TREES

How his arms were ripped off…

His legs were chopped off…

His head was severed from his body…

And his liver was cut out from his body.

This is what Orpheus sang.

Toccata Orpheus is concerned with the ability of music to move the minds of humans as well as gods, and tells about a stranger who pays visit to the Underworld and causes rebellion with his musical skills.