The name of the group, emanating from a piece by 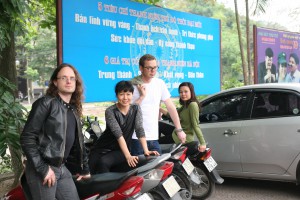 Henrik Frisk, relates to the fact that the Vietnamese is a tonal language using six tones or intonations. For the Vietnamese members of the group, the six tones of their language is a foundation for  communication within their culture. For most Westerners, such a language can only be learnt with much effort. Traditional Vietnamese music is closely related to theatre and its musical forms draw highly on the tonal structure of the language. Obviously, a text set to music cannot have any melodic structure but the melodic lines must follow the tones that give the words their meaning. Hence, the six tones of the language also signify the musical quest that a cross cultural learning situation implies: to negotiate musical meaning beyond the foundations of a single culture.

The đàn tranh player Nguyễn Thanh Thủy and the guitarist Stefan Östersjö write about such negotiations within the work of the group in a book chapter titled Traditions in Transformation: the Function of Openness in the Interaction between Musicians (2012). One example of such a learning process can be heard in different versions of Tứ Đại Oán, a centerpiece in Vietnamese Tài Tử and music that has been the site for explorations of how to the friction between idioms can become a creative tool in new music:

The Six Tones in a performance at the Inter Arts Center, Malmö, during the festival  (re)thinking Improvisation 2011.

The Six Tones at Atalante, Gothenburg, during a tour in spring 2009.

Here, it is not only a matter of learning the idioms of another musical tradition but also, to develop a sensitivity for how ones listening can shape new musical meaning in such encounters.  Jean-Luc Nancy asks, ”What secret is at stake when one truly listens, that is, when one tries to capture or surprise the sonority rather than the message?” (2007, p. 5). The politics of ”true listening” is a challenge to the Western concept of the Oriental ”other” (an identity that needs to be abandoned). In this space, in which meaning has to be negotiated in between traditions and musical idioms, true listening is the primary source for human interaction.