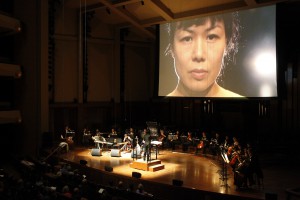 On the 21 March 2014, the world premiere of Nam Maí took place, with the Seattle Symphony Orchestra and the Swedish/Vietnamese group The Six Tones. Bernard Jacobsson wrote in the Seattle Times:

”the most striking aspect of both music and performances lay in the way they combined Asian and Western elements. This was particularly true of one of the evening’s two world premieres, “Nam Mái,” by Richard Karpen. A very substantial piece that plays for about 25 minutes, it sets a small group of Vietnamese plucked-string instruments against an orchestral string ensemble. The Six Tones — actually three musicians, two Vietnamese and one Swedish — played music that was exhaustively rehearsed with the composer but still spontaneous, while the 19 orchestral strings realized a precisely notated score. […] the brilliant performance coordinated by Julia Tai achieved logic through purely aural means, the music seeming to work from the sharply contrasted stylistic worlds of the opening toward a satisfying sense of rapprochement.” 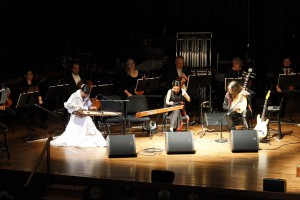 “Nam Maí, for three soloists, nineteen string instruments and film, was composed for the extraordinary Vietnamese/Swedish trio The Six Tones and the string players of the Seattle Symphony. I have worked with The Six Tones (Ngô Trà My, Nguyễn Thanh Thủy and Stefan Östersjö) and writer/director Jörgen Dahlqvist on a few large-scale pieces, including Idioms, a theater work for the trio plus three actors and live electronics. More recently, we collaborated on Seven Stories, a feature-length dance film inspired by traditional Vietnamese Tuồng theatre subjects, which added choreographer Marie Fahlin to our artistic group.

The above comment from the American composer Richard Karpen, a pioneer of electronic music and professor of composition at University of Washington, summarizes the content of this ground-breaking multi-media work for traditional Vietnamese instruments, film and symphony orchestra. The film and the live-choreographed movements refer to material from traditional Vietnamese Tuồng theatre but, just as the music transforms a traditional musical material, the film provides a contemporary reading of these ancient tales.

Composer Richard Karpen (b. 1957) joined the University of Washington faculty in 1989 as a Professor of Music Composition and Experimental Media. He went on to found the school’s Center for Digital Arts and Experimental Media (DXARTS) in 2001, and he was named Director of the School of Music in 2009. He has continued to produce groundbreaking compositions, with a focus on electroacoustic timbres and computer-realized sounds. Dr. Karpen provided the following program note on Nam Maí:

“Idioms captured the interest of my colleagues at the Seattle Symphony, who suggested composing a new work for the Celebrate Asia concert. While I was working on Seven Stories in Seattle last year, the ideas for Nam Maí began to take shape. It is based on a traditional Vietnamese tune that we were using in the film, which then became the source of everything heard in this new piece. As in my previous works with The Six Tones, the music that they play in Nam Maí was created through a mutually enriching collaborative process that we have developed together over the years. I am delighted to have conductor Julia Tai join us for the creation of Nam Maí, a work composed for and with close friends from three continents — Asia, Europe, North America.”

Nam Maí will be recorded on CD by the Seattle Symphony and The Six Tones in autumn 2014.