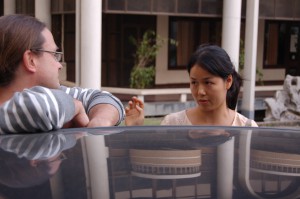 Longing for the Past[1]: musical expression in an inter-cultural perspective

Nguyễn Thanh Thủy (NTT): One day I taught a student in the Malmö Academy of Music a song that comes from the South of Vietnam. This song is built on one specific scale. To a Vietnamese listener that scale always evokes a sense of sadness, even depression. Actually the name of the scale “Ai, Oán” means “depressed”. I was so surprised when the student told me, after listening to my performance of this song, that she didn’t find it sad at all. To her the song sounded very peaceful and happy.

Up to that moment, I had thought of music as a shared, global language. Now I realized that it was not all that simple. Even if this student was already highly trained in musical performance, she did not share my understanding of this music. One of the fundamental issues when teaching a traditional music is how to transmit the knowledge of the fundamental expression of the music. This problem has also been addressed by Bruno Nettl, whose main teacher of traditional Persian music once stated: ‘Dr. Nettl […] You will never understand this music. There are things that every uneducated construction worker outside here understands instinctively, but that you won’t understand.’ (Nettl, 2009a:197-198).” Now, the question is if it really is impossible to achieve this transmission. This of course is something that has always been an underlying question in all our work in The Six Tones, don’t you think?

Stefan Östersjö (SÖ): Yes, isn’t that the fundamental question? I recall the first piece we played in a duo version for dan tranh and guitar in 2006, Dạ Cổ Hoài Lang[2]. I think my understanding of it has been subject to substantial change over the past few years. In 2006, I think I was completely uninformed of the fact that it was a piece about longing and I know I didn’t hear it like that. The year after, we were rehearsing for a tour in Sweden in which we played two distinct versions of the piece, one of them as a trio and one in the duo version that we played already the year before in Hà Nội. In one of the rehearsals I think Ngô Trà My[3] told me the story in the lyrics to the song: how the woman’s longing for her husband is evoked by the distant sound of the war drums. I think it was harder to sense an expression of longing in the duo version we play just because it tends to have many notes. In Western music, sadness and longing most often goes with slow music. And I believe that might be the same in Vietnamese music. But do you really hear the piece as ‘fast’ yourself?

NTT: No, not at all. To me, the piece always is really slow and sad. And for us, the expression of traditional music is concerned with the scale and the specific expression of the vibrato. As Trần Văn Khê, a researcher in Vietnamese music, often briefly described the different modes of vibrato when playing a ‘sad’ or ‘happy’ scale: the vibrato in a sad scale should be slow and extended, until the sound dies out: like if you go away from home and don’t know when to come back. Thereby it is sad. The vibrato in a ‘happy’ scale should be fast, short, up to next pitch, then return quickly to the first pitch, like the happy return of someone who goes away and then soon comes home again.

SÖ: One of the emblematic musical works of melancholy and longing in Western art music is John Dowland’s set of Lachrimae pavans. Some of them, for instance Lachrimae amantis, have quite fast figurations and complex counterpoint, but I doubt that a Western listener would hear this as anything else but slow and mournful music. I think that when we played Dạ Cổ Hoài Lang in Hà Nội in 2006, my listening was simply so much on the surface level that I couldn’t really grasp the essence of the music. One result of this was that I heard the music as fast rather than slow. It was different when I was in Hà Nội in 2010 for CD-recordings with The Six Tones and guest performers. We made a couple of recordings of Dạ Cổ Hoài Lang with the flute player Lê Phổ in a setting with tiêu, guitar and electronics. This time I think my sense of the music was much more along the same line as he was. In fact, we only rehearsed once before the recording session and then made three takes that were all so strong and so different that we wanted to release all three…

NTT: I have the same feeling. Now I find it easier to play Vietnamese music with you, it’s like we use the same language to talk in music. But of course, it is still also different to play traditional music with you, both when we bring in new musical materials such as electronic sounds or you just play ty ba or guitar with the same melody of the framework. That is what I enjoy: the expression is changed in unexpected ways. So the way we express the longing in Dạ Cổ Hoài Lang is not the same as how I know it from the past. Some people raise the question if my performance of traditional music is changing over time through the work we do in The Six Tones. I think it is, but in which ways it is happening, and the significance of this change, I cannot really tell right now.

SÖ: Yes, I wonder how long it takes to reach the kind of listening that ‘every uneducated construction worker outside’ (ibid) would have. I am thinking now of the moment when Betty Carter, in a live recording from the Village Vanguard, switches seamlessly between two standard songs about longing, ‘Body and Soul’ and ‘Heart and Soul’. You can hear the audience giggling and laughing but I believe this laughter is not just a happy response to the wit of the turn in the music but rather a resonance of how deeply they also sense the sadness and the longing that it expresses. They are really present as resonant subjects, as Jean-Luc Nancy would say. Isn’t that what listening in essence is about? To be resonant to sound always means to take part, to participate. As a ‘guest’ in a certain cultural context, this resonance is at first completely absent. This resonance is slowly built through life-world experience: ‘What echoes in me is what I learn with my body’ Roland Barthes says (2002:200).

NTT: I remember a challenge I gave to myself in 2005 when I recorded Dạ Cổ Hoài Lang for a solo CD. The idea was to avoid bringing the piece into the sad, longing mood as it is normally played, but only make it peaceful and serene. It was hard work for me I remember. The resonance of the piece was already there in my mind, in my body. As soon as I played the first phrase of the piece (or sometime it was ok until the second phrase) I was completely immersed in the sad, longing mood. I had to stop, meditate and clear my mind and then start playing the piece over again. So I couldn’t agree more with you, in order not to be a ‘guest’ in a certain culture, one needs to learn to hear that resonance beyond the sound, beyond language, and learn with the body.

SÖ: That is indeed very interesting. What is this knowledge that is beyond the sound? A special moment in the rehearsal before the recording session with Lê Phổ just comes to my mind. Henrik Frisk was playing electronics based on loops that we had recorded. In fact, I think the way we structured the electronics was a more Western take on melancholy: the sonority of the loops – based on guitar samples that we made in the hotel room – and the way they created a soundscape that somehow enhanced the expression of the flute and guitar music. Anyway, we were of course anxious to know how Lê Phổ felt about working with electronics like this. (Henrik was also processing the sound of the flute at times.) Well, to our surprise, he didn’t say anything about the electronics, he just looked like beyond himself (but maybe he was looking more like inside himself) and said it was fine, he thought of his mother and her house and then he just played. It is only now when we talk about the expressive content of this song that I realize what he actually was saying. When he speaks of his mother, he is talking about the same longing for the past as is the fundamental resonance of this music.

NTT: So in fact, with those words you take a new step towards an understanding of the expression of this music!

S: Exactly, I just realized that. In a sense it takes us back to the Nettl-quote you mentioned. It is a long journey to reach the understanding of a native listener, there are always so many layers of lived knowledge to catch up with. Longing is never the same but has different cultural meanings and modes of expression in different cultures…[a] or is it the same longing but expressed in different ways? I guess that will remain the unanswered question.

1) Vọng Cổ (literally ”longing for the past”) is a Vietnamese song and musical structure used primarily in the cải lương theater music and nhạc tài tử chamber music of southern Vietnam. It was composed sometime between 1917 and 1919 by a Mr. Cao Văn Lầu (also called Sáu Lầu or Sáu Làu), of Bạc Liêu, a province in southern Vietnam (Trainor 1975). The song achieved great popularity and eventually its structure became the basis for numerous other songs. The tune is essentially melancholy in character and is sung using Vietnamese modal inflections.

2) Dạ Cổ Hoài Lang (Longing For the Loved One) is a piece of Vietnamese classical music which was composed by Cao Văn Lầu (Sáu Lầu) based on his earlier composition Vọng Cổ.  According to difference sources, the song was composed sometime between 1917 and 1920. Dạ Cổ Hoài Lang describes the love of a woman for her husband who had been away for a long time at the front. She felt loneliness, unease and was worried whether he had still kept his love for her when living in a faraway place where he could be attracted by other women.

3) Ngô Trà My is the đàn bầu player of The Six Tones, a group started in 2006 with the ambition of creating a meeting on equal ground between traditional Vietnamese music and experimental Western modes of expression.

Nettl, Bruno: On learning the Radif and improvisation in Iran (2009a) in Nettl, Bruno and Solis, Gabriel (Ed): Musical Improvisation. Art Education and Society. (2009b) University of Illinois Press, Urbana and Chicago