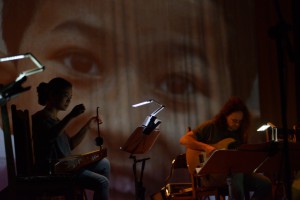 On December 9, The Six Tones will play the premiere of a new version of Arrival Cities: Hanoi with Ensemble Reconsil conducted by Roland Freisitzer. The new score by Kent Olofsson adds an ensemble of nine instruments to this groundbreaking piece of music theatre with documentary film. The performance takes place at the Off Theater, Kirchengasse 41, Vienna at 19:30. 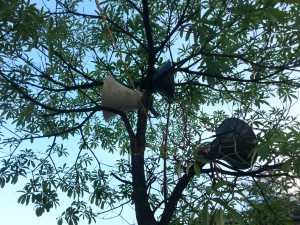 We think of it as a work-in-progress and the process of collecting the documentary materials is core to the artistic method but the project will have several artistic outputs and each of these are shaped in distinct forms. The first version of the piece is a music theatre piece with documentary film for three performers, premiered in Sweden in Nov 2014. The second version is a piece for three soloists, chamber ensemble and video projections which will be premiered on Dec 9 .2015 in Vienna at the Off-Theater, Weißer Saal, 19.30 with Ensemble Reconsil and Roland Freisitzer, conductor.

In May and June of 2014 The Six Tones worked with Jörgen Dahlqvist in Hanoi, making documentary recordings and interviews with people in migration zones in the city. 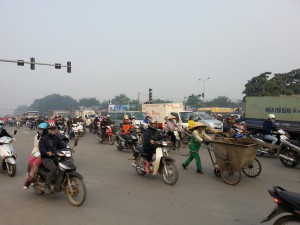 We visited a house where street vendors stay in the night, ten women on a bamboo mat on the floor, some of them having stayed there for twenty years, returning to their home village perhaps once or twice a month. But these women are all from the same village. They take care of each other and share history. Their stories are all very different, one woman works in the streets to pay for her two children’s studies in university in Hanoi. Even if she will never become a Hanoian, her children will surely have the option. 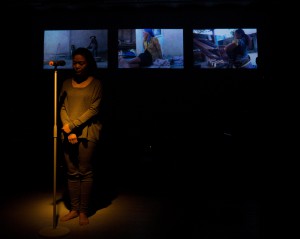 The Canadian journalist Doug Saunders discusses 21st century migration in his book entitled “Arrival City” (2010). Building on research on five continents, his book chronicles the final shift of human populations from rural to urban areas, which Saunders argues is the most important development of the 21st-century. Saunders argues that this migration creates “arrival cities,” neighbourhoods and slums on the urban margins that are linked both to villages and to core cities, and that the fate of these centres is crucial to the fortunes of nations. Arrival Cities: Hanoi deals with the dissolution of the relationship with tradition that urbanization brings. This is the third installment in a series of experimental music theatre productions on migration entitled “Arrival Cities”. Arrival Cities: Hanoi builds a narrative from the life story of Lưu Ngọc Nam, an actor and costume maker in traditional Tuồng theatre. In Arrival Cities, his travels in the country, the homesickness and the tension between traditions that he experiences becomes the source for a further exploration of hand gesture in Tuồng theatre and an expansive portrait of a city vibrant of memories from the Vietnamese countryside. 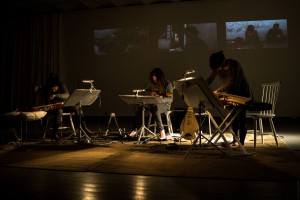 We played  the pre-premiere of materials from the piece in a performance at Manzi’s in June 2014.

The premiere took place on Nov 16 at the Inter Arts Center during the Tacit or Loud Festival.  Ann Jönsson in “Danstidningen” wrote about the piece:”we all follow with our gaze and our ears how they succeed in bringing tempo and rhythm together as the imagery on the video screen unfolds.” She continues by discussing how the many layers of narrative are brought together around the central narrative of Lưu Ngọc Nam’s life story:

”Kent Olofsson has succeeded in the difficult feat to evoke a sense of Vietnamese music in harmony with Western modes of expression. The infernal noise from the chaotic traffic is one of many layers of the rich soundscape that blends with the instrumental music while it also amplifies the stories we can follow on the screen. Texts, rapid images of traditional Vietnamese theatre are interwoven with the tragic story of an elderly Vietnamese actor.”

In March 2015 we returned to Hanoi to collect more documentary materials.  This time we were more focussed on interviewing street vendors. Chris Humphrey followed the work of the group one day in May 2015 and describes it in a recent article:  “Nguyễn Thanh Thủy, who plays đàn tranh in the band, first interviews Hiep, a 40-year-old street vendor from Ba Vi. Whilst carving pineapples, Hiep tells Thủy that she’s been working in Hanoi since 1999, and lives under Long Bien Bridge. Although she’s been here for many years, she mainly knows people from her own village, and essentially still feels like an outsider. 29-year-old vendor Hue, from the same village as Hiep, tells us about having to make deals with the local police to be allowed to work; although that doesn’t guarantee that they won’t be moved on.” (Humphrey, “and of other things”, 2015) The article in the Vietnamese journal “and of other things” can be read following this link. 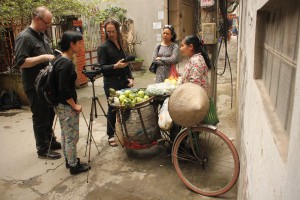 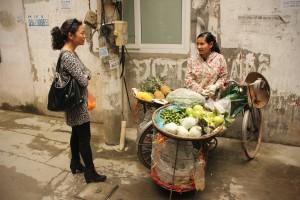 The piece was played for the first time in Hanoi at the Tuồng Theatre Rạp Hồng Hà pn April 4 and 5 2015. These are some pictures from the performance by Nguyễn Giang Sơn: 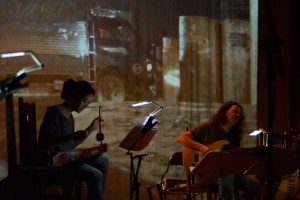 Long Bien market in the background, always full of activities all through the night and in the early morning. The market is one of the central arrival points in the city where street vendors both live in sheds under the bridge and buy fruit and vegetables in the early morning. The truck in the background is bringing goods from the countryside to stores in the market. 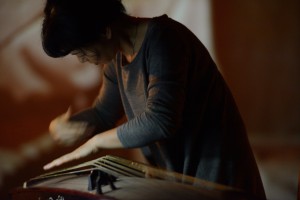 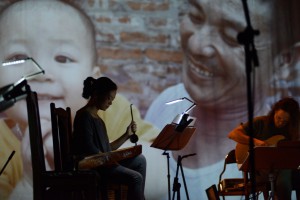 You do not see many children in Long Bien Market since most of the women living here have their families back in their home villages. But when we were there to film one day we met this child and his parents.