Seven Stories is a film developed in collaboration between the Swedish playwright and director Jörgen Dahlqvist, the American composer Richard Karpen, the Swedish choreographer Marie Fahlin and the Vietnamese/Swedish group The Six Tones. The film draws on scenes in seven plays in traditional Vietnamese Tuong theatre and has original music and choreography that develops these sources in different directions. 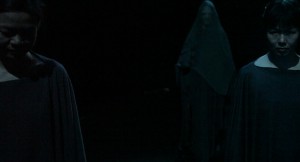 The conceptual grounds for the making of the film has resulted in a language that fuses choreography, theatre and music into a raw and direct, poetic and beautiful flow which transcends the current divisions between art forms. The music brings the notion of world music into into an experimental and surprising new sonic space. Elements from traditional Vietnamese music and theatre merge with electronic and experimental contemporary art music and theatre. Marie Fahlin’s choreography transforms material from Tuong theatre into movement of the three musicians of The Six Tones in a liminal space between theatre, choreography and concert performance.

Further reading in an article by Nguyen Thanh Thuy 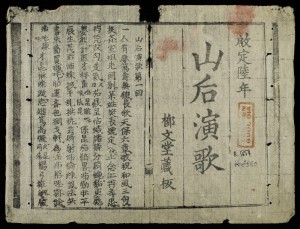 Overview of the seven stories

This is a classic story of civil war, the most common setting in all Tuồng plays. The king of Tề was seriously ill and passed away. The powerful and ambitious chief minister Tạ Thiên Lăng seized the opportunity to usurp the throne and imprison the royal concubine who was together with the new-born prince. Two young generals who were close friends and also true to the deceased king Đổng Kim Lân and Khương Linh Tá rescued the imprisoned royal concubine. Tạ Thiên Lăng sent troops after them. Khương Linh Tá decided to stay behind to fight the pursuers. In so doing he hoped to offer his friend more time to bring the royal concubine and the prince to safety. In the battle Khương Linh Tá was beheaded by the enemy. With his head already cut off from his body, Khương Linh Tá still scooped up his own blood to dash it against the face of his enemy. (This is one of the two scenes used in Seven Stories.) Carrying his head in his hand, he ran off from the battle-field after his friend Đổng Kim Lân. At night in the forest, Đổng Kim Lân lost the royal concubine when her horse went astray. The ghost of Khương Linh Tá appeared as a light to lead the way for Đổng Kim Lân who carried the prince across the mountain to the Sơn Hậu fortress. (The scene when Linh Tá is leading his friend with the prince over the mountain is the second material that is found in Seven Stories. In that scene, all three performers of The Six Tones play the same role.) Phạm Đình Công who was in command at the frontier received the news of the usurpation. He marched his troops towards the capital. Đổng Kim Lân joined them. They advanced towards the capital, defeated Tạ Thiên Lăng and enthroned the prince.

This play has always been one of the most popular in the tradition. It has only existed in fragments but the one scene that has remained has been played extensively. However, in Dec 2013 a new reconstructed version of a full piece with this story was premiered in the Vietnam Tuong Theatre in Hanoi. The old fragment tells the following story of a fox who turned into a woman. Werefoxes and similar tales of old foxes that have the ability to take the shape of a beautiful woman exist in both Asian and Western traditions. Hồ Nguyệt Cô Hóa Cáo tells such a story. The old fox Hồ Nguyệt Cô eventually managed to turn into a human being and in a process of purifying her soul a precious pearl appeared.  With this pearl she became undefeatable. She encounters the young general Tiết Giao’s and his talent conquered her and drew her into a passionate love. However, he was never in love with her but was only after the pearl. In the most passionate minute of her life she falls into his trap and hands the pearl over to him. When she gives him the pearl he runs off and she again starts turning into a fox, leading the life of an animal for the remains of her life. That was the prize she had to pay for her passion.

Han Phung was a high official in the court and he was the uncle of the queen Hàn Tố Mai.He started taking to much advantage of this family position and one day was found byTrịnh Ân -a general loyal to the king – riding the royal carriage on town. Trịnh Ân demands that he should immediately leave the carriage and also fights Han Phung and defeats him. One day Hàn Tố Mai carried out her revenge for her uncle’s defeat and served the emperor too much drinks and made him forge an imperial rescript with the imperial seal ordering that Trịnh Ân be immediately beheaded. Trịnh Ân’s son tried to rescue his father but was also killed in the fight. At the frontier command headquarters, Đào Tam Xuân learned of the unjust killing of her husband and her son. Overcome with grief she immediately marched the troops towards the capital and took command of the situation in the court. She demanded that the queen should be properly punished for the murder and the emperor followed her request and the queen was arrested and eventually beheaded. The scene when Đào Tam Xuân receives the news of the death of her husband and son is the material for Seven Stories from this piece.

The general Diệm Thiên Phong had a son, Diệm Thiên Hùng, who was not to be trusted. For this reason, the general advised his son not to take part in a contest for new officers at the royal court. But Diệm Thiên Hùng insisted and won the contest and was sent to the frontier with his troops. In the war he was successful and defeated the enemy. When he returned from the war his evil nature was revealed and he advanced towards the capital to take the throne. In the fight, the princess herself fights him and was killed. The fighting scene holds some famous choreographic material when she uses her long hair as a sword. Eventually, all is put back to order by the old general and his daughter who invite Diệm Thiên Hùng home and there they have him arrested for treason. The fighting scene with the princess defending herself against multiple enemies with only her long hair as a weapon is the scene we used in Seven Stories.

This story is centered around a magic tree that, if used as a helve for a battle axe, could secure the defeat of the enemy. When the first general came to the Mục Cát village to obtain the tree and make the axe he was defeated by Mộc Quế Anh, the female chief of the village. The troupes were reinforced with the appearance of another general, Tôn Bảo. Mộc Quế Anh was struck by Tôn Bảo’s good looks and ability and fell in love. She defeated him too, captured him and convinced him to marry her.

Dương Lục Sứ, hearing that his son Tôn Bảo had failed to obtain the tree and moreover had married the chief of the village, figured out a way to make him return. Upon his return, Tôn Bảo was imprisoned. Mộc Quế Anh saw no other way out than to  offer the tree to Dương Lục Sứ to save her husband. However, Mộc Quế Anh offered the tree three times, but all the times Dương Lục Sứ refused to accept it. Mộc Quế Anh was angry, and they started a fight. When he was about to be defeated she freed the son but to her surprise Tôn Bảo started fighting her to save his father. At this moment, Dương Lục Sứ admitted that he only had wanted to test how much she loved his son. He now accepted the gift of the tree and gave his blessing to their marriage. The two were now officially accepted by Dương Lục Sứ as husband and wife and the whole family shared the task of conducting the war against the enemy.

In Seven Stories we created a scene where Mộc Quế Anh confronts and eventually fights Dương Lục Sứ with a cardboard tube. The sound of the tube hit on the floor of the theatre became the source for electronic music.

This play tells the story of three women who in different ways helped to save the throne. In Seven Stories we only refer to a scene with one of these women. At the death of the King, Triệu Văn Hoán wanted to take over the throne. He falsely accused the queen dowager of having a lover. Xuân Hương, a daughter of a Grand Tutor, asked to be allowed to impersonate the Queen-Dowager and die in the latter’s place. However, her waiting maid Bích Hà – one of the three main characters of the play – also  requested to take the punishment in the plan to save the Queen dowager.

The part of the piece that became a scene in Seven Stories is set in a divided family. The daughter, Phương Cơ, finds herself in a situation where she does not know the political standpoint of her father, Tạ Ngọc Lân, a retired court official. She pretends to be mad in order to figure out her father’s position in relation to the rebellious plans of her sibling, Tạ Kim Hùng, who is helping Triệu Văn Hoán in his quest for the throne. Eventually she finds that her father is on her side and they together decide that she will go to the capital and, again pretending to be mad, she will obtain clear evidence of his guilt. After learning the truth Tạ Ngọc Lân decided to act to disrupt the traitors’ plans, and volunteered to go to kill his rebellious son.

Lưu Kim Đính was an angel who was sent down to earth to pacify the war caused by a devil called Dư Hồng. She met Cao Quân Bảo who was on the way to rescue his father who had been arrested by Dư Hồng. They fell in love and promised to marry when the war end. Lưu Kim Đính defeated Dư Hồng and rescued Cao Quân Bảo’s father. Cao Quân Bảo became seriously ill and was unconscious and hovering between life and death. Lưu Kim Đính had to use her magic to bring him back to life. It is the very waking up scene that was used as material in Seven Stories.