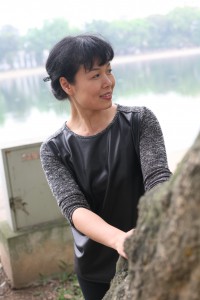 Nguyễn Thanh Thủy was born into a theatre family and was raised with traditional Vietnamese music from an early age in Hà Nội. She studied at the Hanoi Conservatory of Music where she received her diploma in 1998, followed by a Master of Arts at the Institute of Cultural Studies in 2002. Since 2000 she holds a teaching position at the Vietnam National Academy of Music. She has toured in Asia, Europe, the USA. She has received many distinctions, in 1992 First Prize in the Contest of Traditional Instrument Performance on Television and Radio, Vietnam, as well as in 1998 First Prize and the Best Traditional Music Performer Prize in the National Competition of Zither Talents, 1998, Vietnam. Nguyễn Thanh Thủy has recorded several CD’s as soloist with orchestra and solo CDs: Độc tấu đàn tranh Nguyễn Thanh Thủy Vol.1 (Solo dan tranh Nguyen Thanh Thuy Vol.1) – 2005, Tranh Improvisation (with Jakob Riis, laptop). Suối Tranh, (2012) (Nguyen Thanh Thuy Vol.2) and The Six Tones: Signal in Noise (2013) on dB Productions, Sweden. In 2013 she  published a book chapter in an edited book on Cambridge Scholars Publishing, and live recordings and a book chapter in (re)thinking improvisation: artistic explorations and conceptual writing, (a box with two CDs, a DVD and a book, published by Lund University Press.) In 2014 she published a book chapter on cross-cultural musical learning in “Spår av Musik”, a book edited by Stefan Östersjö on Lund University Press.
She works with both traditional and experimental music as a đàn tranh performer/improvisor; collaborates with many musicians and composers around the world. Between 2009 and 2011, she was involved as artistic researcher in the international research project (re)thinking improvisation, as a collaboration between the Vietnam National Academy of Music and the Malmö Academy of Music. Since 2012 she is carrying out an artistic doctoral project at the Malmö Academy of Music concerned with gesture in traditional Vietnamese music.
Link to website