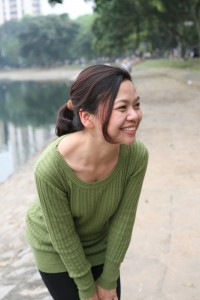 studied at the Hanoi National Conservatory of Music, where she received her diploma in 1994 and a pedagogical exam in 2007. Since 1994 she teaches the đàn bầu at the conservatory in Hanoi. She has performed at festivals in China, Spain, Korea, Scandinavia and Vietnam and has recorded one CD as soloist with orchestra: Lời ru quê hương (Lullaby of the Native Land) – 2001. Since 2008 she is Board Member of the Asian/Korean Orchestra. With The Six Tones, she has toured in Europe, Asia and the USA.