Born in 1967, Stefan Östersjö is one of the most prominent soloists within new music in Sweden. Since his debut CD (Swedish Grammy in 1997) he has recorded extensively and toured Europe, the US and Asia. His special fields of interest are the interaction with electronics, and experimental work with different kinds of stringed instruments other than the classical guitar. His great interest in chamber music has resulted in the founding of flute, viola and guitar-trio HOT 3 and collaboration with most chamber ensembles and important soloists in Scandinavia such as Jonny Axelsson, Geir Draugsvoll, KammarensembleN, Ensemble Gageego and Ensemble Ars Nova. He is continuously working with composers both in Sweden and abroad on the task of extending the repertory of solo works and chamber music with guitar. As a soloist he has cooperated with conductors such as Lothar Zagrosek, Peter Eötvös, Pierre André Valade, Mario Venzago, Andrew Manze, Franck Ollu and Tuomas Ollila. He has recorded extensively for the Swedish National Radio and also for Swedish TV as well as in many other countries.

Dr. Stefan Östersjö studied with Gunnar Spjuth and Prof Per-Olof Johnsson at the Malmö Academy of Music and also with Peder Riis and Magnus Andersson in Stockholm and Darmstadt. He holds a PhD in the performance of new music, his thesis SHUT UP ‘N’ PLAY! Negotiating the Musical Work is published by Lund University Press. He is at present engaged in artistic research on the performance of new music at the Malmö Academy of Music and as a research fellow at the Orpheus Institute in Gent, Belgium. He is frequently invited to give lectures and master classes at universities, festivals and academic conferences in Europe, the USA and Asia. 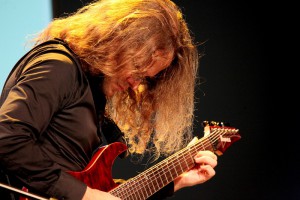 In 1995 he made his CD debut as soloist on Ensemble Ars Nova’s second CD (nominated to a Swedish “Grammy -96” for best classical album).

His first soloCD, with works by E Carter, J Dillon, F Donatoni and T Murail, recieved a Swedish “Grammy Award” in the category of “Best Classical Album” in 1998.

His second soloCD, with works by Swedish composers, was released in spring 2001.

In the summer of 1999 he recorded Kent Olofsson’s “Il Liuto d’Orfeo”, a recording which is released by GMEB in Bourges and by dB Productions (Sweden).

He recorded the lute works of JS Bach on the 11-stringed alto guitar, released on dB Productions (Sweden) in 2003.

In 2003 “Trio con Forza”, a constellation of Swedish works for flute, viola and guitar, with HOT 3 was released on Phono Suecia.

His fourth solo CD on dB Productions, “Play Time” with works for guitar and electronics was released in 2004. In 2005 “Rhizome”, a portrait CD with works for guitar and chamber ensemble by Swedish composer Christer Lindwall was released on Phono Suecia (Sweden). His recording of Kent Olofsson’s Guitar Concerto “Corde” with the Gothenburg Symphony and Mario Venzago was released on Phono Suecia in 2008. He has also recorded the complete guitar works by Danish composer Per Nørgård, released on Caprice records in autumn 2008.

In august 2009 Elektron Records (Sweden) released Black Bile Extempore a duo CD with the British composer Natasha Barrett. In 2010 he released Henrik Frisk’s “Repetition Repeats all Other Repetitions”, on Spanning, Chamber Sound, Växjö, Sweden. In 2011 a CD titled Strandlines was released on dB Productions, with works for guitar and electronics by Karpen, Olofsson, Mangs and Frisk. In 2012 he released a recording ofPer Nørgård’s Libra on Da Capo (Fredrik Malmberg, conductor).In 2013 a double CD with The Six Tones was released on dB Productions and a box (with two CDs, a DVD and an edited book) titled (re)thinkinging improvisation: artistic explorations and conceptual writing on Lund University Press.